This info is permanently under development due to industry updates and your info is always already welcome!

The fish exported from Brazil are mostly wild Freshwater fish from the Amazon river but also some 10% interesting Marine Fish & invertebrates.

Brazil authorities had in the past a positive list of fish.

BUT now  May 1st, 2020 new regulation that respects a NEGATIVE LIST as published in a book= This is the book containing all fish species with some degree of threat in Brazil. It’s a hard work done by hundreds of researchers in several workshops over several years. The list of threatened species is reviewed from time to time and the next update is already underway.For the purpose of the new Normative Instruction regulating the use for ornamental purposes, the fish contained in this book are NOT ALLOWED (a list in alphabetical order of the species can be found in the index at the end of the book).
The species Leporacanthicus joselimai; Parancistrus nudiventris; Peckoltia compta; Peckoltia snethlageae; Scobinancistrus aureatus; Scobinancistrus pariolispos; and Teleocichla prionogenys, instead being listed on the Red List Book, ARE ALLOWED TO BE EXPORTED, in accordance with Ordinance No 130 of 27 APRIL 2018 (https://www.mma.gov.br/informma/item/14755-noticia-acom-2018-05-2982.html).

Most freshwater fish are exported from the cities Manaus, Belem, Rio de Janeiro and Sao Paulo.

Manaus is known for export of Cardinal tetra, Rummynose, other Tetras, Corydoras, Discus, Angelfish, some Loricaridae or other cat fish.

Sao Paulo has good airport connections and can therefore offer a large variety of Brasilian fish to most parts of the world.

Hereby a nice short video as introduction on the Wild Fish from Brazil made for Project Piaba= https://www.youtube.com/watch?v=4qcgWkr-33k

We= Bassleer Biofish is proud sponsor for Sustainable collection of Amazon fish= it has a socio-economic benefit for the local people(fisherman en woman, piaberos) SEE OUR SHORT FILM, we look for more sponsors= Collecting of wild fish in the Amazon region

Project Piaba is a non-governemental project to promote the sustainable collecting of aquarium fish in the Amazon with eco-social benifit for nature & mankind.

For more info on this project see www.projectpiaba.org

The fish from Burundi are collected in Lake Tanganyika but also tank raised & pond raised nearby the lake.

Cameroon has a special variety of West-African fish, mostly from rivers. There all wild collected

It has been known to supply a large variety of Cichlids (mostly Pelvicachromis), Killifish, some catfish, Polypterus, Tetraodon puffer, aquatic plants etc.

Due to lack of good infrastructure the exporter needs several weeks to organize and prepare the shipment.

China has the longest history of breeding goldfish.

They have also in the south an interesting variety of wild fish.

Most of the fish are supplied for the very large local market.

Currently they are still (since many years) one of the major suppliers of the common Neon tetra.

Some of the fish can become very large and have therefore large interest for the Asian market and the public aquaria.

Only a few exporters are active since it is political, technical and financial difficult to run an export facility.

Colombia can supply a large variety (400+?) of wild freshwater fish from the Orinoco and Rio Negro river system.

Video 1 with Overview of Wild Fish from Colombia =https://www.youtube.com/watch?v=PlLa24qg_jE

Video 2 with a visit to the Llanos collecting area & great underwater filming= https://www.youtube.com/watch?v=9jyMEYXWbs0

Video 5  with Apistogramma alacrina and more fish in the river up-stream = https://www.youtube.com/watch?v=1bFWBqeRLb4

Video 6 with a common collecting place: streams of Los LLanos with many common fish = https://www.youtube.com/watch?v=ub301ekJWbM

All videos en more videos can be seen via this link=

Several exporters collect the fish and ship them by air or truck.

In the recent years the Czech exporters also combine their stock with fish imported (wild & tank raised) from other countries.

From Denmark you can order high quality plants.

There are a few fish breeders but they supply mostly the local and West-European market.

From Fiji you can obtain a large variety of wild collected marine fish and invertebrates!

But in 2018: Ban of export of Live Corals & Live Rock= see the publication

Hawaï marine fish are wellknown for its Yellow Tang = Zebrasoma flavescens, Flame angel= Centropyge loricula, Acanthurus achilles and many others

But recently severe restrictions have been imposed on the export= for more details read following publications:

28th October 2017= No permits for Fishing in Hawai= https://www.reef2rainforest.com/2017/10/28/breaking-hawaiis-aquarium-fishery-closed-permits-invalidated/

10 April 2018 = Aquarium industry has NO significant impact on fish = http://www.westhawaiitoday.com/2018/04/10/hawaii-news/draft-ea-finds-no-significant-impact-to-aquarium-fishing-resumption/

The exporters are located in several large cities and some have their specialties.

From India you can get different loaches, barbs, shrimps, gourami and many others.

Currently many wholesalers are specialized in supplying the local pet shops since there is a large, fast growing local market.

Indonesia is known for its export of marine fish & invertebrates.
Since Indonesia has many islands and surrounded by the ocean it has a great potential to supply a large variety!
The farming of corals is now done at a professional scale.
During the last decennia the breeding of freshwater fish is gaining a large % of the export.
Not only wild fish such as Clown loach or shrimp but  the breeding of uncommon fish, that are normally available as wild fish, is becoming important.

Breeding of fish, freshwater, marine, goldfish and koi has been well developed in the recent decennia.

The fish exported from Japan are mostly the famous Koi carp.

Also few varieties of goldfish and fancy goldfish are available.

Kenya is specialized in the export of marine fish and invertebrates.

Currently we have no knowledge if freshwater fish are exported.

See here a video on YouTube about the nice Marine fish of Kenya: https://www.youtube.com/watch?v=y1oo2eYaYkE

Currently we are informed that (wild) marine fish and invertebrates are exported from  Madagascar.

Malaysia is known for its large farms for breeding freshwater fish.
Due to restrictions & fish health regulations the farming of goldfish and koi carp has become limited and many specialized in farming Asian Arowana.
Next to the breeding of the popular fish like Livebearers, Barb, Gourami, Tetras, Cichlids, etc. there is also large farming of Stingray, Blood parrots and Discus

Peru can offer a large variety (350?) of wild freshwater fish from the Amazon region.

The Philippines, with the many islands, have a long history of exporting wild marine fish and invertebrates.

Sri Lanka is one of the fastest growing exporting country for ornamental fish.

Sri Lanka used to be known for its export of large variety of marine fish.

In the last decennia a lot of investment has been done in freshwater fish farms. Guppies were the most important in variety but now the variety of fish is growing fast with Cichlids, Tetras, Goldfish, etc.

Singapore is still the largest (nr. 1) exporter of fish in the world accounting for 18% of the worldwide export volume in 2017 and for 23% of the export volume to the EU.

It is strong due to many years of experience and knowledge, due to connections with many fish farms in all Asia, due to good airline connections.

Taiwan is exporting wild and tank raised marine fish, freshwater fish and many varieties of shrimp

Thailand is known for its export of a large variety of tank raised freshwater fish and plants, also for gold fish & cichlids.

Most of the popular Betta fighter fish originate from Thailand.

Vietnam is one of the new (in the last decennia) exporting countries with freshwater and marine fish & invertebrates. 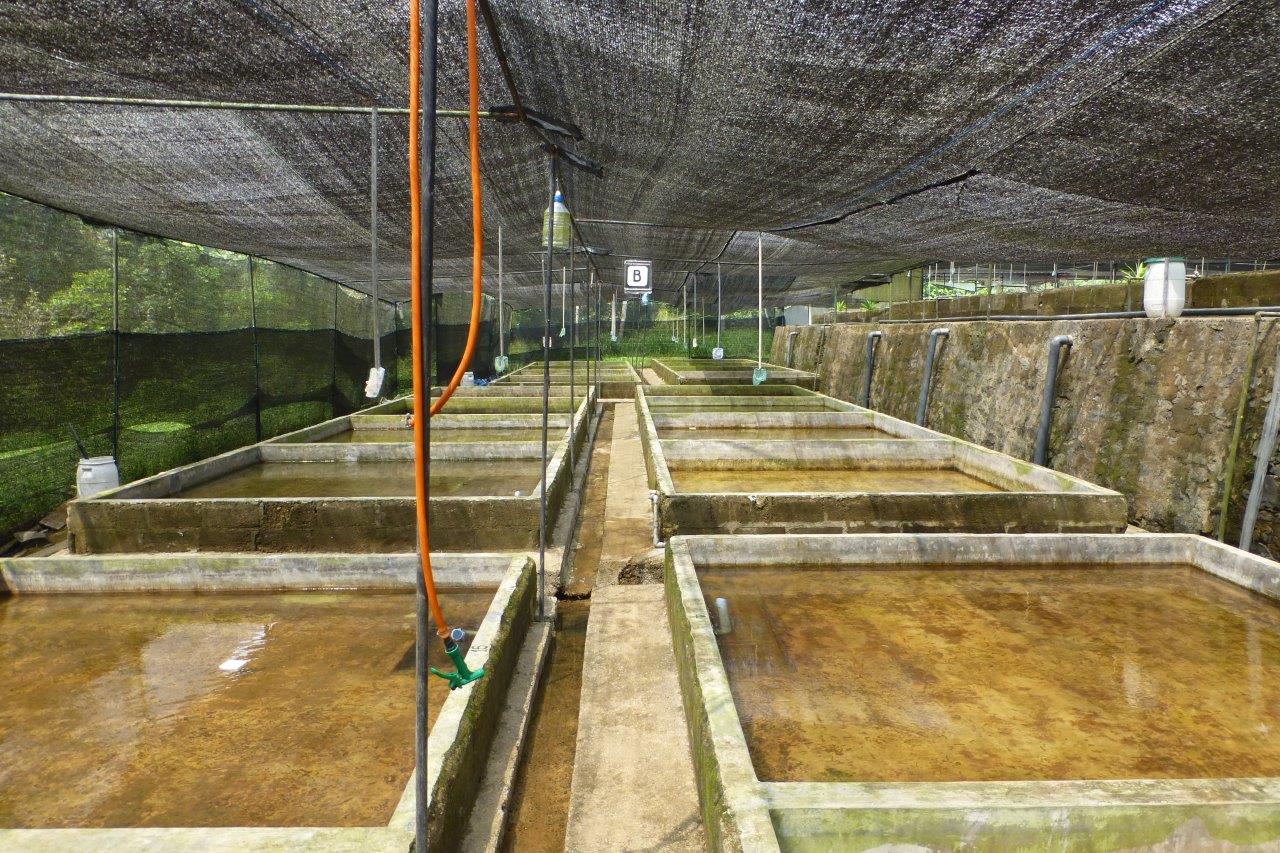